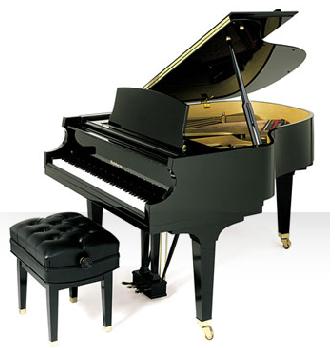 Baldwin Pianos are a musical legacy that for over a century, continues to live on. Each piano that carries the name Baldwin, is a piece of that legacy which has contributed to American piano history and manufacturing.

The company was founded by Dwight Hamilton Baldwin in Cincinnati, Ohio in 1862.  Also known as D.H. Baldwin, the name has always been one of the most widely renowned names in the American piano industry and history.

The company originally began as a retail enterprise, who sold Steinway and Chickering pianos. They began manufacturing their own pianos in 1889, as "D.H. Baldwin & Co." In 1903, shortly after the founder's death, the name became the Baldwin Piano & Organ Co.

The Baldwin piano is recognized as a universal favorite between the leading operatic artists and virtuosos of the pianoforte.

The Baldwin Grand Piano, which was designed, manufactured and guaranteed by the Baldwin Company in Loveland, Ohio, is exclusively enjoyed by top tier of artists in all areas of musical expression – ranging from pianists, composers, conductors, singers, and instrumentalists - as well as outstanding symphony orchestras all over the globe.

Baldwin purchased the Wurlitzer and Chickering names in 1988, but in 2008, both names ceased production. Samick (Korea) manufactured pianos with the DH Baldwin name in the 1980s, as pianos were purchased by Baldwin and sold through Baldwin dealers.

Around the decade of the 1990’s, the company was sold and relocated to Arkansas and Missouri. Today, Baldwin is owned by the famous Gibson Guitar Company (in 2001).

The following brands have been in use or are in development by Gibson, since 2003: A.B. Chase, Aeolian, Ampico, DH Baldwin (built in Arkansas since 2004, discontinued in 2008), Cable, Ellington (2003, made in China), Hamilton, Howard grand pianos, Ivers & Pond, J & C Fischer, Kranich & Bach, Monarch, Mozart, Pianola, Pianovelle, Sargent.

In 2006/2007, Gibson purchased the Dongbei Piano Group, the third biggest Chinese piano maker in the world.

In 2008, Baldwin moved all production of pianos to factories in China (owned by Gibson Guitars, Nashville, TN). Pianos are manufactured there for the US market, the Chinese domestic market, and other international piano markets.

Baldwin ceased piano production at its only remaining U.S. factory in Trumann, Arkansas in December 2008. This facility remains open as a US distribution and service center.

Without any doubt and dispute, from the nine-foot concert grand to the five feet, two inch baby grand, every Baldwin piano demonstrates the most modern ideas of acoustical science and piano making; its manufacture is precision engineered, which gives each instrument the highest degree of excellence. Any Baldwin made piano is worth the time, money and energy to rebuild or refurbish.

Looking for the Current Market Value of your Baldwin Piano?

Are you Buying or Selling a piano and need to know what it is worth?