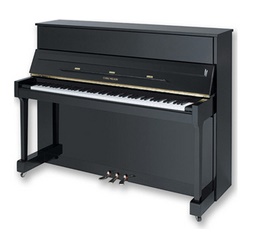 Cable-Nelson Pianos was a company originally based in Chicago, and built to be a distinguished leader in the piano manufacturing industry at the turn of the 20th century. During its heyday, Cable-Nelson acquired two Chicago piano companies: The Lakeside Piano Company and the Sweetland Piano Company.

The Cable-Nelson Piano Company began operating in Chicago in 1903 as the Fayette S. Cable Company. Nelson joined the firm in 1905 and the company changed its name to Cable-Nelson Piano. The pianos' serial numbers began at 26000 and ran up from there.

Eventually, Cable-Nelson was the brand distinguished from lower priced pianos, while Everett piano were known for catering to higher-priced ends. By the end of 1950, Everett was merged with the Meridian Corporation and a decade later, it became a part of the Hammond Organ Company. Around this time, there became a Hammond Piano as well as the Everett Organ Company.

Earlier, in the 1940s, Everett manufactured the Everett Orgatron, which later became a part of the Wurlitzer Piano, with its tone derived by amplifying wind blown reeds. Nevertheless, both labels were not well-received by consumers and production eventually ceased.

"A Real Piano and a Fair Price"

Cable-Nelson lives to this day as a piano so well established, that musicians and pianists still rank these as ‘number one’ for their durability, and excellence of product, not to mention a high standard of production. After Yamaha decided to resume the production of Cable-Nelson pianos, the demand for this piano brand had soared, thanks to its high grade and excellent quality of manufacture, for a fairly affordable price, truly standing to its motto of being “A real piano and a fair price.”

The Cable-Nelson factory is one of the industry’s most strategically located factories, along with the excellent efficiency of the organization and equipment used there as well. This is one of the main reason why it leads in manufacturing top quality pianos today.

Find the age of your Cable-Nelson piano using the chart found below:

Looking for the Current Market Value of your Cable-Nelson Piano?
Visit our Appraisals Page to Order An Appraisal -- CLICK HERE