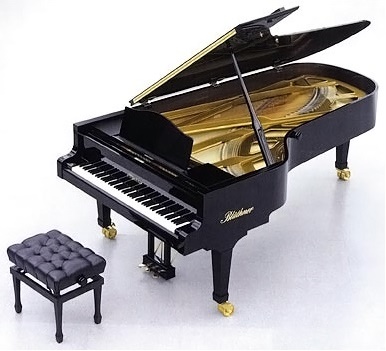 Blüthner Pianos, officially known as Julius Blüthner Pianofortefabrik GmbH is a German-based company that specializes in manufacturing top quality pianos. The company is distinguished for their long line of pianos, that to this day retains a significant role in piano manufacturing history.

Blüthner Pianos was established by Julius Blüthner together with three other craftsmen in 1853 in Leipzig, Germany. In 1854, Blüthner exhibited the company’s first designed instrument in public, which received praises for being a topnotch concert instrument. The ornate cases were top of the line, being decorated with veneer, mother of pearls and gold leaves.

In 1872, the patented Aliquot System of stringing was invented and has since then played a distinguished role to manufacturing quality pianos worldwide. After its destruction from the air raid in 1943, the company was rebuilt in 1945 soon after the war. Despite several storms and other issues that it has faced, the company has stood for 162 years defining the words of its founder Julius Blüthner “May God prevail”.

All through out its history, Blüthner Pianos have manufactured instruments which have been used by several known personalities, musicians, concert halls, music festivals and universities.

Known famous personalities in history that have chosen Blüthner included Queen Victoria of Great Britain, Nicholas II Tsar of Russia, Makarcius III Archbishop of Cyprus and many more. Some of the famous musicians that have chosen to play their masterpieces with Blüthner pianos are Mikhail Pletnev, Arthur Pizzaro, Wilhelm Kempff, the composer Franz Liszt, Claude Debussy, recording artist Wolfgang Sauer, directors Johann Starauss and Igor Markevitch and many more.

Known as the piano with the “Golden Tone”, many people all throughout the globe are using Blüthner pianos because of their high quality craftsmanship, their top class performance, as well as the ornate cases they showcase.

Looking for the MARKET VALUE of your
Bluthner Piano?

Find the age of your Blüthner piano using the chart found below: