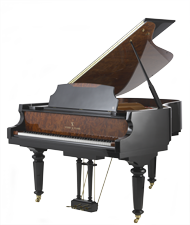 Story and Clark pianos are among the most innovative pianos in the world. They have combined the features of the traditional piano along with some of the latest technology in piano manufacturing.

With this combination, the player can enjoy the best experience of playing the piano with quality features of a well-made piano.

The history of the Story and Clark can be traced from 1857 when Hampton L. Story built his first piano. He began as a salesman but was able to buy it from the owner and had several piano companies from 1859 to 1883. The company and partnership with Melville Clark in 1884 in Chicago, Illinois together with Hampton L. Story and his son Edward H. Story.

Story combined quality craftsmanship, tone and affordability of his work with Clark’s technological advances to create the best piano of their time. Their partnership did well enough that they were able to open up new manufacturing companies in England and Germany.

Melvin Clark left their partnership in 1901 and opened his own piano company which later became famous for player pianos.

The company has been sold and split up many times but the pianos are still being sold under the same name. Following Clark’s technological advances, the player units, manufactured by QRS Music Technologies, can be fully expanded as a current electronic keyboard or MIDI controller.

Each unit is can be ordered with a MIDI strip, that fits underneath the piano's keyboard, and installed with MIDI and USB out ports docked within the piano.

The serial numbers printed on each piano are referenced with the age of the unit, relating to the year of the piano's manufacture. The number can be seen stamped on the cast iron plate near the tuning pins, on the key stop rail, and/or on the soundboard.

Find your Story and Clark Piano's serial number along with the piano age in the chart below.

Looking for the Current Market Value of your Story and Clark Piano?
Visit our Appraisals Page to Learn More -- CLICK HERE