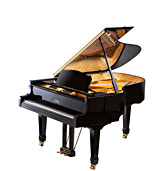 In 1903, Ernst Hiis founded the company and named it E. A. Ihse, but sold it after 12 years as he decided to work for another company. He was recognized as the leading expert and manager of the Astron piano company in 1923. The production of pianos in Estonia was hindered and even stopped by the Second World War as many piano manufacturing factories were destroyed, but Ernst Hiis continued his grand piano production.

By the order of Joseph Stalin in 1950, based on The Peoples' Furniture Factory, the Tallinn Piano Factory was formed and the new piano was called Estonia.

The first Estonia piano was presented to the State Board in April 1951. The company was state-owned from 1950 to 1990 and manufactured two grand piano models (190 cm and 273 cm) that were distributed all over the Soviet Union.

The company got weaker after the fall of the Soviet Union in 1991, and in 1993 the factory was privatized to its managers. After the factory's turn down in the early 1990s the Soviet Union collapsed, the firm was revived by Indrek Laul, who invested in the company and introduced its products to the United States. In 1995 Indrek Laul bought the company and took over control and supervision of manufacturing up to the present day.

In 2003 a new factory building was completed and opened as the company is now exerting more efforts to redesign and bring Estonia grand pianos to a world-class and even more professional level. Components and materials are now imported where appropriate, such as German Renner actions and hammers to better give each instrument a better feature and the clients a better piano experience.

Estonia pianos have consistently been receiving recognition as the best value in hand crafted European pianos over the last 5 years, as they cost about half and often less than half the price of similarly made pianos coming from Germany. The company also received a high ranking slot from PianoBuyer, a recognized reference in the piano industry.

Locate the age of your Estonia Piano using the chart found below.

LOOKING TO BUY OR SELL AN ESTONIA PIANO?